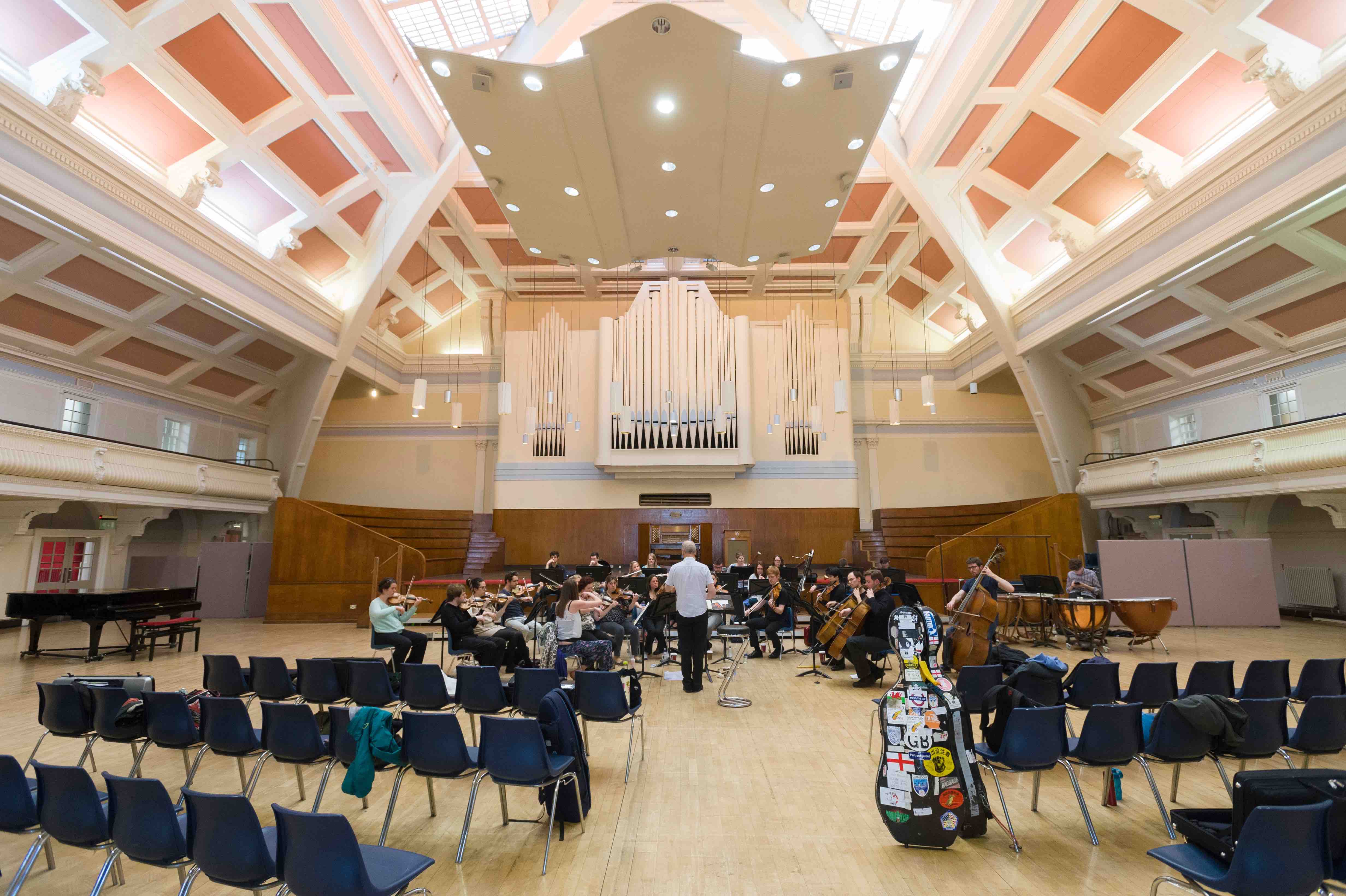 The English Young Artists' Sinfonia Rehearsing for the Finalists' Concert in the Great Hall, Goldsmiths, University of London.

April 2016 saw the culmination of our second Composing Competition with the Finalists' Concert on 19th April 2016 in the Great Hall, Goldsmiths, University of London. The three finalists' compositions were performed by the English Young Artists' Sinfonia with the winning composition being chosen by our judges on the night.

Following the highly succesful inaugural Competition and Finalists' Concert last year, the English Schools’ Orchestra was once again proud to support a nationwide competition to find the brightest young creative musical talent of the 21st century.

In association with PRS for Music, the Andrew Lloyd Webber Foundation and the Peter Ustinov Foundation, we jointly held a composing competition for young people. We invited young composers between the ages of 14 and 25 to submit an original composition of their own creation.

The winning composition was performed in London, in April 2016, in front of an invited audience by the English Young Artists' Sinfonia, a professional chamber orchestra consisting of former members of the English Schools' Orchestra. A cash prize of £250 was awarded to the winning entry.

We are passionately committed to helping young musicians to develop their creative and performing talents and this competition provides an exciting venture in fulfilling this aim.

The three finalists in our 2016 Composing Competition. 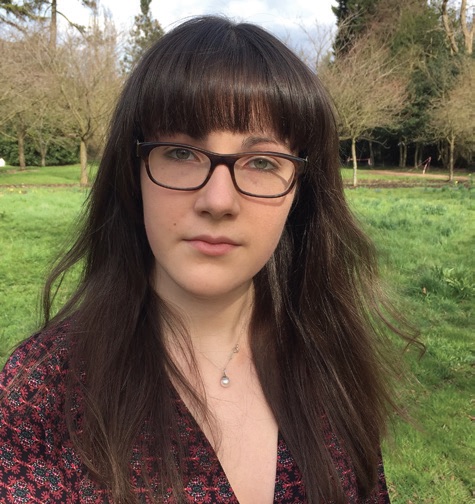 Katrina Toner is 18 years old, and is currently in her final year of secondary school. She studies composition with David Sutton-Anderson.…more 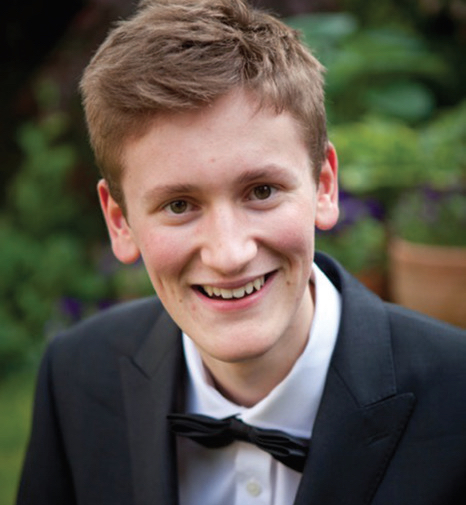 Sebastian Skelly, 20, is coming to the end of a threeyear degree course in Creative Music Technology at the University of Surrey.…more 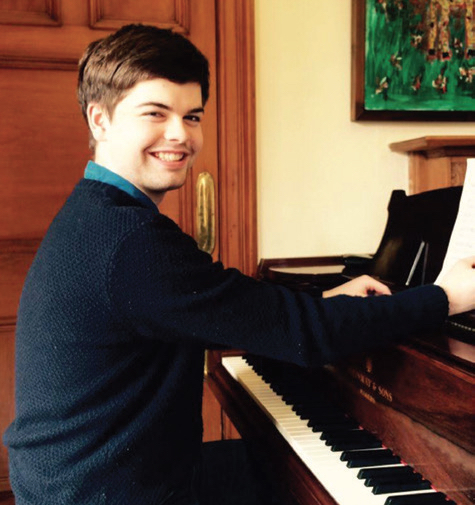 Findlay Spence was born in 1997 in Edinburgh and now lives on the Black Isle in the Highlands of Scotland. In 2013, Findlay.…more

Scott Stroman, together with the other judges, Edward Gregson and Richard Sisson, giving feedback following the three performances.

The Finalists' Concert was held in The Great Hall, Goldsmiths, University of London on Tuesday 19th April 2016 in front of an invited audience.

The Compositions were performed by the English Young Artists' Sinfonia, conducted by Robert Pepper MBE.

Compositions were judged on the night by the three judges, Edward Gregson, Richard Sisson and Scott Stroman and a winner was chosen.

The successful composition was Circus After Midnight by Sebastian Skelly.

• By entering the Competition, the entrant will be deemed to accept these terms and conditions and entrants agree to be bound by the decisions of the judges, which shall be final and binding.

• The entrant may enter the ESO Composing Competition by submitting a completed entry form obtained from here.

• Entries must be sent in a Sibelius file to competition@englishschoolsorchestra.org.

• Entries received after the closing date will not be accepted.

• There is no fee to enter the Competition.

• Only one composition per entrant will be accepted.

• Each participant may submit one composition lasting a maximum of 8 minutes, which must be written for a designated Chamber Orchestra instrumentation (2 flutes, 2 oboes, 2 clarinets, 2 bassoons, 2 horns, 2 trumpets, timps and strings).

• By entering the Competition, the entrant is agreeing to let ESO use their name and composition in public, should they be shortlisted.

• A shortlist of three or more compositions will be prepared by the director of ESO.

• The shortlisted compositions were announced on the ESO website and were performed by the English Young Artists' Sinfonia on 19th April 2016 at Goldsmiths College, London.

• After the performance, the panel of judges chose the winning composition. This was announced at the concert and on the ESO website.

• The prize consists of £250 for the winning Composition.

• The prize is as described and no cash or other alternative will be offered.

• The Winner agrees to participate in any reasonable publicity for the Competition as well as any other promotional events.

• Entrants will not be able to withdraw their composition once entered.

• Personal details of entrants, such as email and phone numbers, will be kept confidential by ESO and not passed to third parties. The name of the shortlisted composers will be revealed by ESO in publicity and programmes for the concert.

• Any further enquiries can be made via email to competition@englishschoolsorchestra.org.These terms and conditions shall be governed by and construed in accordance with the laws of England and each party submits to the exclusive jurisdiction of the English Courts.

If you would like to know more about the Orchestra, please contact our Orchestra Manager, Diane Davies, using the contact information at the top of this page, or go to our online registration form.

Stay up-to-date and keep in touch.

Want to get involved